If you've created a Monkey desktop theme, let me know about it using the Monkey Feedback page, and I'll include a link to it here, so lots of Monkey fans can download it.

Now that the Monkey Heaven web site contains Monkey desktop wallpaper pictures (see further down this page), screensavers and sound samples, the only thing missing from being able to make a complete Monkey Windows Theme was some Monkey icons and cursors.. well not any more!

Thanks to David Purchase, here's a range of Monkey icons and cursors for you to use on Windows!

To use these cursors and icons, you need to first of all unzip this file to the Windows folder that contains the .ani, .cur and .ico files (on Windows 2000, this is usually C:\WINNT\Cursors\ - but this may be different on your PC). Then, you need to use the Control Panel that allows you to select your own custom cursors and icons, and select the ones you wish to use.

If you have any ideas for other Monkey icons or cursors, please let me know using the Monkey Feedback page.

OK, so these aren't Monkey desktop themes - but they are the closest thing so far...
You can use these 1024 x 768 images as wallpaper on your computer!
Just click on an image below to view the full size image, or right-click and choose "Save Target As..." to save the full size image.

Many thanks to Kodama-san for sending the first 2 to me, and to Skywalker for the Masako Natsume wallpaper image. 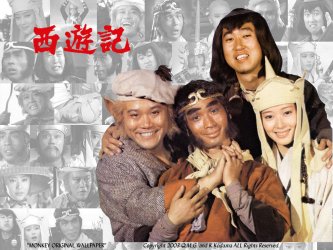 Kodama-san says of this image:
"I used the cover photograph of an old television guide for the photograph of wallpaper. I've always regretted that there was no beautiful picture of the monkey. So I did not lower DPI of wallpaper, it can print on paper and this quality can also be made into a poster." 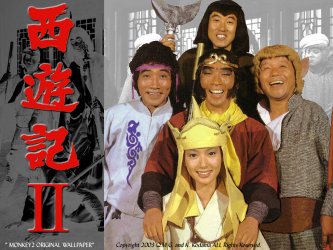 Kodama-san says of this image:
"This was also taken from old TV Guide. But it was a laborious work, because at least a quarter was hidden in the letters. Although you may not understand by appearance, I modified the picture. However, since I didn't have a good idea for background, no background is included."
If you have an idea for a background image (it's a problem which needs a partition for both sides of the photograph), please let me know using the Monkey Feedback page. 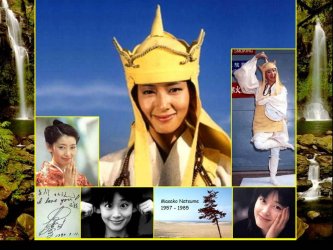 Skywalker says of this image:
"As a child, I had a real crush on Masako Natsume, however I was deeply saddened to hear of her death, therefore I have scoured the net and have made my own desktop tribute to Miss Natsume, please feel free to post it for downloads by other fans. I only found out from your website this morning of her death in 1985, I had often thought of getting her autograph one day, and seeing how she looked in her forties."


Also - if you go to the Monkey Sounds page, in the WAV files section, you'll find some short sound clips of cool noises / incidental music from Monkey that work really well in your Windows sound scheme!