The Magic Monkeey show at the Edinburgh Festival 2003

The script was written for them by Elizabeth Wong, and here's how the directors describe the script:

The Stone monkey was created by Kyan Yin, elemental forces caused the stone to erupt and the Monkey King was born. The monkey king was a highly intelligent and curious creature and his thirst for knowledge begins his adventures. He goes to school with the inmortal Guru who teaches him 72 ways to transform and transport himself. The Monkey King then breaks his promise and is expelled from school; this is where the story begins. Will the Monkey King ever get his crown back?

The script is very exciting; it was last performed in New York and got great reviews.

To whet your appetite for the show, here's some photos taken at rehearsals on Wednesday 16 July - click on any of the pictures below to see a larger version of it. 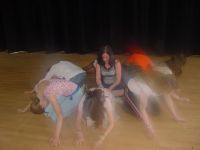 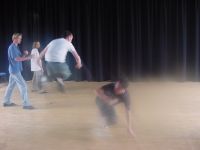 For more information about the "The Magic Monkeey" show, drop an email to .

To be automatically notified whenever I update this page with new information about the "The Magic Monkeey show" at this year's Edinburgh Festival, please fill in the form below with your email address, and click OK.

Back to the Monkey Events page